A chief strategist (from a big brokerage firm we all know) recently said this to Forbes, explaining the sudden popularity of Russian stocks among foreign investors. Such a relief. Thank you! I heard we invented the radio, won WWII, were the first to land on Moon. And now it feels so good to know, we’re still part of the world! Like… one-sixth of it. Jokes aside, the situation is quite queer indeed.

Note. Most of my blog is in Russian, so you probably won’t be able to read it, but that’s okay. If you want to say something, find me on Facebook or leave a comment below (I reply to all of them!).

Let’s face it – we all look towards abroad ourselves, right? All the best comes from “the West”. The grass is always greener there. We say “investment” – think America, Europe; even India, China, Australia. We keep the bigger part of our savings in dollars, euros, pounds at times. Financial advisors (myself included) normally recommend doing so to their clients.

In his classic book “The intelligent investor” Ben Graham warns his readers against putting their money anywhere outside the U.S. discussing defaults of some (if memory serves) Czechoslovakian bonds.

So… what happened? What on Earth brought investors from “over there” to our “poor” Russian stock and bond markets?

Let’s examine some “pros and cons” of investing in Russia I’ve collected to better understand the situation.

The advantages of Russian financial markets for a foreign investor

As to the equity, some of our “blue chip” stocks have a dividend yield of 5+ percent a year. This is more than the average yield of the MSCI Emerging Markets Index (~1.46% – as of today).

Some even dare to call our securities “safe havens” 😉

Here’s a 5-year annualized performance of MSCI indices of the four largest developing economies in the ascending order:

And the Oscar goes to… Russia! With its iShares MSCI Russia ETF (ERUS: NYSE ARCA & MKT) bringing investors about 6.8% a year (gross).

Well… that’s not bad at all. Especially given all those filthy “S” words Washington has been swearing at us lately.

ERUS is trying to break above its pre-2014 sanctions level ($42.36) as worries about the new political penalties fade.

Fitch gives us its BBB rating which makes us better than Brazil and India. Moody’s, on the other hand, rates us at Baa3 which means we beat Brazil, but are beaten by India and China. Finally, S&P Global gives us its BBB- rating which puts us at the same level as India, behind China and well ahead of Brazil.

China seems to be an unquestionable leader of this game (at least as to the “Big Three” thinking). All our ratings, however, are technically located in the investment section. True, the lower medium part of it, but still.

And again – we are beyond the competition! Russia has had a debt-to-GDP ratio of 11.8% at the end of 2018. Other major developing countries were worse than that:

As of July 1st, the NWF had 3.1 trillion rubles. A month later it suddenly doubled. Thanks to the rising oil prices resulted in the country’s oil companies’ extra revenue.

As of the end of October this year we had almost $541 billion in central bank international currency reserves, which is about a third of our estimated GDP value($1 637.89 billion) and more than any other BRIC country has.

Our market is consolidating. Aside from traditional oil and gas companies, more consumer-oriented businesses such as Yandex (YNDX: NASDAQ) and X5 Retail group (FIVE: LSE) are in demand among foreign investors. New stores and services appear.

Since the start of the year, some analysts have increased their estimates of our domestic companies’ earnings, while trimming their projections for emerging-market companies in general. They anticipate more growth to come, despite weak GDP growth figures.

Many Russian companies are said to be largely undervalued relative to their foreign peers.

As we can see, there are plenty of reasons for American and European investors to like Russian financial markets.

Here’s what could go wrong

There are no major problems with credit ratings, government spending, debt-to-GDP ratio, international currency, and NWF. But some of the abovementioned arguments are purely speculative.

While capital gains of iShares MSCI Russia ETF (ERUS: NYSE ARCA & MKT) may be impressive relative to corresponding ETFs of our peers, it looks overbought to me in the near-term. 35-37 dollars would be a much reasonable price level if you want to go long.

Is iShares MSCI Russia ETF overbought? by zWealth on TradingView.com

Just as Chinese, Indian and Brazilian currencies, the ruble has been historically weakening against the U.S. dollar and euro. Moreover, the ruble has a nasty habit of doing this fast and sharp: it stays at a certain level for a while, makes you believe it’s going to be there forever, then collapses two-fold when you least expect it.

Here’s a true story. My grandmother bought some dollars and made a deposit in one of the major Russian banks in 1998 (how come? she was a communist after all!). Guess, how many rubles you could buy for a dollar back then? Six! And now, 21 years later, it’s sixty-six! 12% annualized just by saving you money in dollars! No stock, bonds, gold or any kind of tricky trading system.

So much for ruble strengthening, see.

Now we all say it’s 65 for simplicity of calculations (although it fluctuates between 62 and 69).

Let’s consider a simple example. An American investor buys some Russian government bonds for a thousand dollars. He/she enjoys a 6.43% yield for a while (great when you think of 10Y U.S. Treasury bonds yielding only 1.83% – as of December 3rd, 2019). Let’s say our investor holds the bond for three years and receives 19.29% gross. And it doesn’t default, no – the ruble suddenly goes from 65 to 130!

The potential slowdown in Europe and China

This could hurt our staple export and create a rather difficult external environment, which will eventually worsen our economic fundamentals.

“It’s not an urgent priority, but they’ll get there later this year”, says director of the energy security program at the Center for a New American Security, Elizabeth Rosenberg. At the moment Washington seems to be paying more attention to the economic conflict with China, however, sanctions on Russian sovereign debt remain a centerpiece of the legislation.

The aggressive external politics of our president Vladimir Putin in Venezuela and Ukraine could trigger the acceleration of this process. 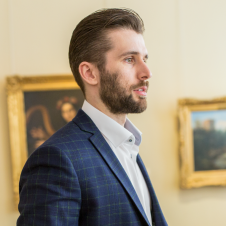